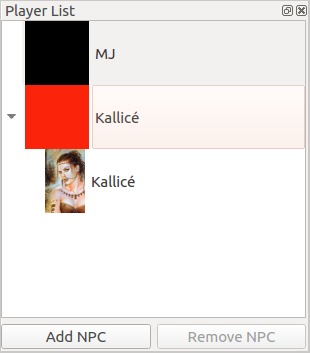 This panel lists all connected players and their characters.
The first player on the list is always the local player (you).
The GM is indicated by a darker background (on standard look and feel). The first level of names are players. Player can have many characters.

GM can change name of anyone (players and characters). Player can only edit his player and his characters.

Double-click on the color, a color selector dialog appears.

Rigth-click on character, Select Set Avatar….
A file selector dialog appears. Use it to select your avatar *.jpg, *png, *.bmp.

Any player may add character from the profile connection dialog At any moment, players can add character.
Click on Add PC (Add NPC for GM).
A dialog box appears.
Enter the character name in the first field.
Eventually change the color to represent it on maps and in chats by clicking on the colored button.

To put character on map, just check character. Players are only able to put their own characters on map. The GM may add or remove all the characters.
Token appears on the map center.

Uncheck it to remove it from map.

Just drag the character from List of players to the vectorial map.